If Prime Minister Benjamin Netanyahu’s team expected the forthcoming peace agreement with the Emirates to translate into a steep rise in mandates come the next elections, a Panels Politics poll that was published in Maariv on Thursday morning probably disappointed the folks on Balfour Street. The poll was conducted on Wednesday, following the publication of reports of a possible sale of stealth F-35 aircraft to the UAE, and also following the sacking of a spokesman for the Sudanese Foreign Ministry, who proposed a peace agreement with Israel without first asking the Sudanese government.

It’s likely that of these two incidents, the possibility that an Arab country in the Middle East would be equipped with the same state-of-the-art aircraft as the Israeli Air Force, cooled down the public’s enthusiasm – if there ever were such enthusiasm in the first place.


According to the poll, if the election had taken place today, the Likud party would have received 29 seats. It’s an increase from the 27 seats Likud took last week according to the same poll, but it’s still 7 fewer than Likud’s current real estate in the Knesset, and shows zero dividends from Netanyahu’s much celebrated UAE deal as well as the promised deals with Bahrain and Oman. Predictions of a deep recession the israeli economy is entering and the threat of a general closure during the high holidays also seem to be doing their part. To put it in perspective: last May, Likud was projected to win as many as 42 mandates, today it is down by 12.

According to the poll, Yair lapid’s Yesh Atid has taken over from Benny Gantz’s Blue&White as the political alternative to Netanyahu, with a projected 20 seats in the new elections. Lapid is followed closely by Yamina Chairman Naftali Bennett, who picks up 19 seats, one more than in the previous poll by the same outfit.

After a decade of trials and errors, Bennett is finally perceived by the public as a viable alternative to Netanyahu at the helm. Netanyahu did him a huge favor by throwing him and his party to the opposition benches, because while the PM bears full responsibility for the spread of the pandemic, the collapsing economy and the shift against Israel’s military power, Bennett is remembered as an effective defense minister and an able warrior against the spread of the coronavirus. His impassioned speech from the Knesset podium in which he yelled at the coalition government to stop destroying the lives of rank and file Israelis helped a lot, too.

The Joint Arab List is down one Knesset seat, to 14. Blue&White continues to linger far behind in single digit territory, with 9 seats. Liberman’s Yisrael Beiteinu is stable with 9 seats, as is Shas, with 8 seats. United Torah Judaism also retains its power with 7 seats. Meretz, the last vestige of Israel’s once mythic left is down to only 5 seats, compared to 7 in the previous poll.

The apparent division of blocs in the next Knesset gives Likud and the Haredi parties only 44 mandates, while a Lapid-Arabs-Meretz bloc would have 48 seats. Yamina and Yisrael Beiteinu, should they choose to form a bloc, would have 28 seats together, enough to force Netanyahu to acquiesce to any imaginable demand on their part. 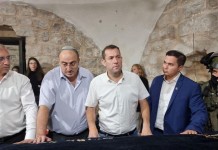