Some 1,000 demonstrators, alongside with public figures and rabbis, protested in Jerusalem’s Paris Square, demanding the release of the youths detained by the Shin Bet.

The demonstrators, mostly Religious Zionists, demanded that PM and DM Netanyahu, who is in charge of the Shin Bet, stop the rampage being carried out by the Jewish department of the Shin Bet, which includes barring the minor detainees from meeting with their attorneys, and abusive interrogation methods used against the same minors, as had been revealed by a Channel 2 News investigation.


“In no other place in Israel, would law enforcement permit its agents to break into a classroom in the middle of a lesson, arrest a student, complete with a perp walk, and issue draconian orders against him. Residents of Judea and Samaria’s rights matter,” the rally organizers said.

Rabbi Ohad Karkover, community rabbi of Kochav Hashahar, called to revoke the powers of the Jewish section of the Shin Bet. “They gave those madmen powers and they don’t know how to use them,” he said.

On Friday, about 100 Religious Zionist rabbis and officials published an open letter to Prime Minister Benjamin Netanyahu, Justice Minister Shaked and Internal Security Minister Gilad Erdan, who is in charge of the police. The letter, which follows the arrest and interrogation of young Judea and Samaria residents by the Shin Bet without seeing their lawyers, said:

“We are following with great concern the arrest of the three Jewish youths by the Shin Bet in recent days, while they are still being prevented from meeting a lawyer.”

“Only this week the Shin Bet improper interrogation methods have been exposed in the Duma affair, and only this week the court rejected confessions extracted by the Shin Bet from a suspect in a nationalistic crime,” they noted, adding, “As those in charge of the law enforcement systems, we expect you to ensure that the children receive all the rights they deserve legally, like every other child in the State of Israel.”

“An investigation aimed at reaching the truth cannot be conducted in the dark with trampling on civil rights,” they concluded.

On Saturday night, Haim Drukman uploaded a rare video with unprecedented criticism of the police, the Shin Bet and their methods of arresting and interrogating the three boys who were detained and forbidden to see a lawyer.

In the video, Rabbi Drukman asked the prime minister to release the youths. “I appeal to the prime minister from the depths of my heart to order the immediate release of the three young boys, the three youths detained by the Shin Bet,” he said. “If there is a problem, it is appropriate to investigate them as they do in the State of Israel, but under no circumstances should this be done in the dungeons of the Shin Bet.”

“They are not terrorists. And I am concerned about the proper and just administration of the State of Israel. ‘Righteous justice You shall pursue’ – justice must be pursued with justice, not injustice,” Rabbi Drukman said, and begged the PM: “I really ask you to order that this injustice be stopped immediately.” 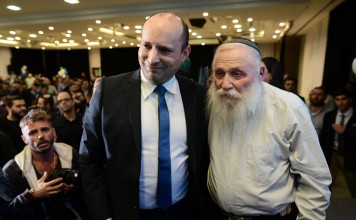