The honorable Judge Jared Smith of the Florida 13th Circuit Court is facing his first election, having been appointed by Gov. Rick Scott (R) in 2017 to fill the vacancy created by the resignation of Judge Walter Heinrich at the Hillsborough County Court. He was then appointed by Gov. Ron DeSantis to Florida’s 13th Circuit Court, where Smith took office in 2019. Having served on two different courts, Smith is running for his first real election in the primary on August 23, 2022.

Smith is being challenged by attorney Nancy Jacobs, who is Jewish. According to the Tampa Bay Times (Accusations fly in Hillsborough County judicial race), she said she had filed a complaint against Smith with the state Judicial Qualifications Commission. She refused to reveal what the complaint was about because of “restrictions on judicial candidates’ public statements about each other.” But that didn’t stop her from re-posting on her Facebook page the following litany, by Shelley Reback, WMNF-FM, Tampa, Florida. Before we go there, please keep in mind that Jacobs is the Planned Parenthood candidate in this race:

Jacobs’ opponent, Jared Smith … is best known as the judge who denied Jane Doe, a Minor, access to abortion services in a judicial bypass proceeding because, he alleged, her GPA and school grades were too low to demonstrate the maturity required to support her request for an abortion. Instead, he ordered her to have a forced birth.

Fortunately, his decision was reversed by an appeals court, but thereafter, Smith continued to defend his decision in the press. He also touts his status as a Deacon for Idlewild Baptist Church as a reason to vote for him in his campaign literature.

Idlewild is a very politically active church, and a well-known bastion of conservative, Republican ideology. In judicial forums, Smith has publicly stated that his values come from the Bible and his value system comes from the life of Jesus.

At campaign events, his wife asks for Prayer Warriors for his campaign. He’s an “Amy Comey Barrett Republican” who believes there’s no separation between church and state and apparently, he puts his religion above the rule of law.


OK, so now you know everything I know, but there’s this other tidbit that may change your mind in either direction, courtesy of the TBT: Smith is making campaign appearances in local Christian churches. In one such appearance, Smith stood with his wife, Suzette Smith, while she told the crowd he wants to deliver the message that, “I’m a believer, I’m a judge and I’m a Christian,” and portrayed the campaign as a religious crusade aided by God, who “fights the battle for us.”

She was then asked about Nancy Jacobs and responded: “We pray for her. She needs Jesus. To deny God and to deny the Bible is a person that’s — the heart is very hard toward God.”

Suzette also told her audience that she and her husband fast regularly so God would reward them and that this is the reason why Jacobs was yet to file her complaint against them.

Two things: 1. She filed. 2. If she hadn’t filed, would she be listening to God? 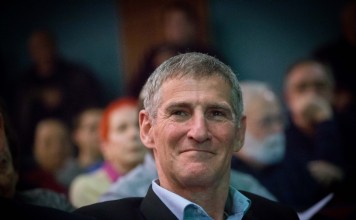