Washington columnist Dana Milbank is Jewish, we looked it up in Wikipedia. He even married Jewish, her name is Anna Greenberg (after his marriage to Donna Lynn DePasquale in an interfaith Jewish and Roman Catholic ceremony that ended in divorce). In fact, he is so Jewish, he doesn’t even get the irony of his using anti-Semitic slurs in attacking the most prominent Jewish supporters of President Trump’s pro-White Supremacist comments.

It’s not so complicated, really. In a Sunday essay he published, titled “The Trump administration’s three ‘court Jews’ disgrace themselves,” Milbank reduced three rather admired gentlemen: Gary Cohn, Steven Mnuchin and Jared Kushner, to their most base common denominator: they are Jews.

Singling out Jews for condemnation based on their ethnic affiliation is as old as ancient Egypt. Of course, Milbank, who prides himself on being unpredictable politically—sometimes he favors Republicans, other times Democrats—didn’t think he was using an ancient anti-Semitic technique. He felt that the fact that these three men with their impressive business record were Jewish compelled them to act one specific way in response to their boss’s views on the Nazis and the rest of the scum from last week’s Charlottesville riots.

“All three let it be known through anonymous friends and colleagues that they are disturbed and distressed by what Trump said,” Milbank reports, “but none is speaking publicly about an outrage that makes millions of Americans feel as though they are living a nightmare.”

One of the most blatant forms of racism is to refer to an individual from a particular ethnic group as the representative of his or her entire race. Members of minority groups experience this every day – for the most part it’s a mild form of racism, borne by the other person’s ignorance. Human beings are just built this way. Occasionally, especially after some dramatic incident, all Blacks become potential looters, all Muslims blow up buildings, all Jews crave money, and, yes, all Japanese Americans are thrown into concentration camps.

Milbank’s guilt by ethnic affiliation button must have been set to 11 on Sunday. The three “Trump Jews” actually reminded him of what he called “the stadlan.”

Hebrew is not his strongest suit, so he misspells shtadlan, but he also harbors contempt for what he defines as the “court Jew,” who “existed to please the king, to placate the king, to loan money to the king. He would dress like other members of the court, and he would beg the king for leniency toward the Jews but, ultimately, his loyalty was to the king.”

That Milbank took this entire supercilious observation about Jewish history from some dark region of his mind is obvious to anyone aware of the heroic, and often thankless task of the community representative (the word is actually often used as “lobbyist” in modern Hebrew). But then he quoted Reform Rabbi Danny Zemel, spiritual leader of Washington, DC’s Temple Micah, who told him: “These guys are the princes of American business power. If they can’t find an ounce of moral fiber from their own Jewish past, we’re in a very sorry way.”

Here’s something from Rabbi Zemel’s Jewish past: after Donald Trump was elected President, Zemel told the Washington Post that he wants to further understanding between liberals and conservatives. He wants to convene very personal conversations —maybe one-on-one, maybe in small groups — between members of Temple Micah and conservative counterparts, perhaps Trump voters, whom they wouldn’t otherwise meet. He might ask speakers from diverse viewpoints to address the synagogue.

So much for furthering the understanding between liberals and conservatives…

Here’s a question: how offended would Dana Milbank be if anyone dared criticize his views on, say, Israel on the grounds that he is obligated to think and feel a certain way because he is Jewish, and an influential media Jew to boot? What about when he wrote, in a 2015 column: “Without two states, there won’t be even one Jewish state if — God forbid — my daughter or her progeny someday have no place else to go.” Was that a betrayal of the Jewish dream of a return to our Biblical homeland, which, alas, was more Judea and Samaria than Jaffa and Caesarea? Is it treasonous for Milbank to promote the uprooting of half a million Jews, to make room for the 23rd Arab dictatorship in the Middle East?

Of course not, because although Milbank’s notions are repugnant, we refute them because they are bereft of facts and are lethal – not because he is the son of a Jewish mother. Which, incidentally, we’ll have to see some papers for when his daughter or her progeny some day, God forbid, wants to settle here (we’re joking, we love the children of Jewish anti-Semites). 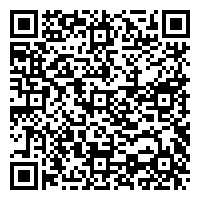