“When I win my primary on August 18, it’s going to make history. It’s going to be the first in U.S. history that a Republican Jewish woman will go up against a Democrat Jewish woman.”

Laura Loomer, who made this remark in speaking to The Jewish Press, is one of six Republicans running in a primary next week in Florida’s 21st congressional district. She currently is the front-runner and has raised over a million dollars.


If she wins, Loomer will face off against the incumbent, Lois Frankel, a Democrat. Both women are Jewish, and the district has a sizable Jewish population.

“She’s the epitome of what I call a self-hating Jew,” Loomer said about her opponent. “That’s why the Palestinian Hamas-funded media thanked her and other Jewish members of Congress.”

Loomer was referring to a recent article in the Palestinian Chronicle praising a letter signed by Frankel and 200 other members of Congress in June calling on Israel Prime Minister Benjamin Netanyahu to refrain from annexing portions of the West Bank.

“Israel belongs to the Jews,” Loomer said. “We need more people in Congress who are going to wholeheartedly say that without worrying about political correctness or screeching from ‘the Squad.’ I’m an open, proud Zionist, and I have no shame in saying that we need to advocate for a one-state solution in support of the Jews in Israel.”

Asked if someone like herself with a reputation for radicalism can win, Loomer responded by citing an internal poll that showed her beating Frankel. She then added, “I’m not calling for policies that are going to destroy America. I’m not supporting radical Marxist groups like BLM. I’m not supporting Anntifa. That’s radical.

“I’m an America-first patriot, and there’s nothing radical about loving your country and calling out actual haters and actual radicals.”

For her outspokenness, Loomer has been banned from Facebook, Twitter, and other platforms. In 2018, she chained herself to the door of Twitter’s headquarters in New York to protest her ban from Twitter while people like Louis Farrakhan are allowed to make anti-Semitic remarks on the platform.

Already anticipating victory in November, Loomer said, “I’d love to ask Rashida Tlaib and Ilhan Omar on the floor of the House of Representatives: ‘How many times is the word Jerusalem mentioned in the Koran?’ The answer is zero. Jerusalem is the capital of Israel, and Israel belongs to the Jews and always will.”

The Frankel campaign did not respond to an e-mail request for comment.

A Letter From America 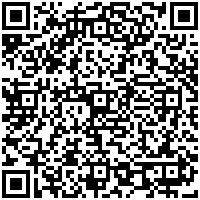