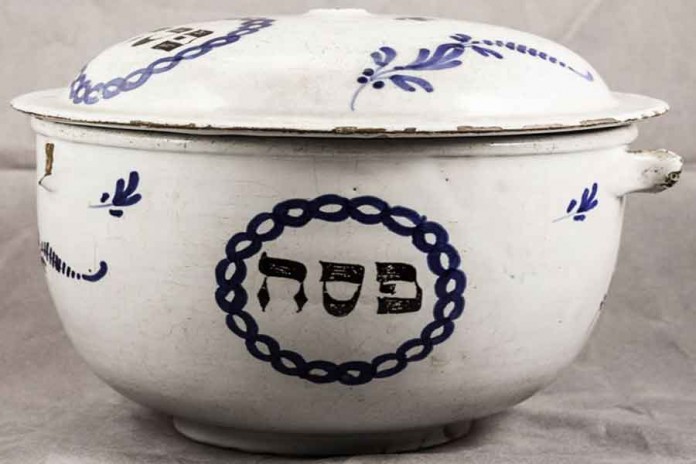 For this column, I thought I would share some interesting items relating to Pesach that are in a local museum or from my personal collection.

Recently, the Jewish Museum of New York presented a wonderful exhibit that showcased items, including a great quantity of Jewish ceremonial objects, that had survived the ravages of World War II in Europe and which, shortly after the war, were distributed to various Jewish institutions in Israel and America since no rightful owner could be found. 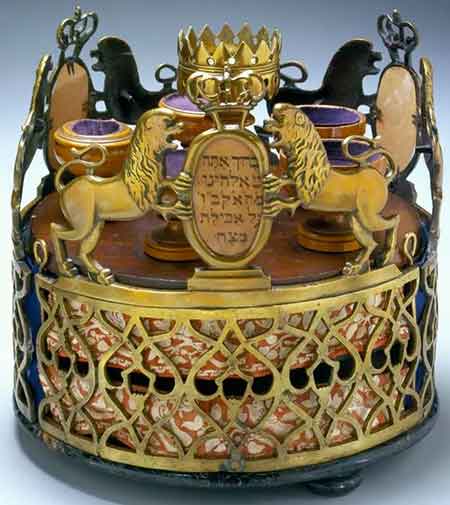 The exhibit, titled “Afterlives: Recovering the Lost Stories of Looted Art,” included an object which I had admired for many years in various publications but had never actually seen in person due to it not being put on display at the Museum for over 30 years. Shown here is the piece: a large, magnificent tiered Seder set, cast in heavy brass, the only known example of its kind. This unique Seder set combines wooden trays for matzah with wooden holders for the other symbolic foods, and a pedestal for the wine cup that is always filled for Eliyahu.

Although there are other 19th century examples of tiered Seder sets, none are similar to this one. Most are refined silver works made in Germany or Austria by trained silversmiths or are imitations in base metals. They lack the robust energy that is conveyed by this piece, with its rampant lions that stand, mouths agape, holding cartouches bearing oval pieces of paper that have been expertly inked by hand with the Hebrew blessings recited over the symbolic foods. The curvature of the lions’ bodies and their notched paws are echoed in the shapes of the grillwork surrounding the wooden trays.

Similar brasswork (the method this was made in is known as “sand casting”) appears on Eastern European Hanukkah lamps of the 18th and 19th centuries. Rampant lions often decorate the backplates of these lamps, while decorative grillwork sometimes forms an apron panel in front of the lights and on the sides. The maker of this Seder set was familiar with the artistic traditions of those Hanukkah lamps. In this work, he wed familiar forms to new materials, creating a dynamic composition that rises from the dark wooden base through the open pattern on the middle zone to the triumphant lions; the whole is crowned by the base for Eliyahu’s cup, which would have added a further vertical accent.

While you no longer have the chance to see this incredible Seder set (at least for the foreseeable future), due to the ending of the exhibit this past January, there is still an opportunity for you to see a different Pesach item from the collection of the Jewish Museum of New York – this one is another piece that I had yearned for decades to see in person after viewing it in various publications. It finally went on display recently, part of a small exhibit titled “Scenes from the Collection, Signs and Symbols: Zodiac,” which features Jewish antiques from the collection of the Museum which depict the signs of the zodiac; some of them have each symbol titled by its Hebrew name. 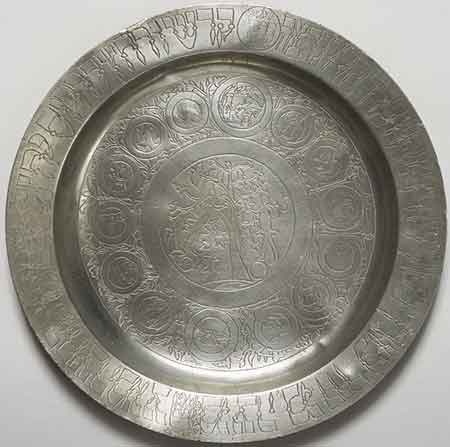 I was delighted to see in this exhibit a beautifully engraved pewter plate from Germany. What makes it so very special to me is the specific artistic manner of what is displayed. In the center of the plate are Adam and Chava in Gan Eden, and the depictions of these figures are most unusual as they feature no faces, no signs of gender specificity, and they seem to be floating, as if where they are is quite unearthly, mystical even. If I did not know that this was an 18th century engraving, I would think it was a piece of modern art. Surrounding this scene are the 12 signs of the zodiac, all charmingly engraved in a manner similar to that of Adam and Chava, and it is finalized by a very small, almost intimate depiction of Akeidas Yitzchok.

On the rim of the plate is the order of the Seder service, expertly engraved in Hebrew. For those of you who cannot make it to the Jewish Museum, here is a photo of the plate which, of course, does not do it justice. 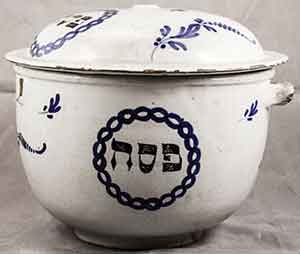 Seen here from my collection is a soup tureen, made of fine tin-glazed pottery known as faience. This faience is typical of what was produced in Strasbourg, France during the 18th and early 19th centuries. Strasbourg is the capital and principal city of the Alsace region in northeastern France, and many Alsatian-Jewish families owned dishes, bowls, and cups made from this material which are decorated in the same manner, with blue floral motifs with the word Pesach in bold black lettering. While the aforementioned types of dishes have survived in relatively substantial numbers, this is the only surviving soup tureen I am aware of. 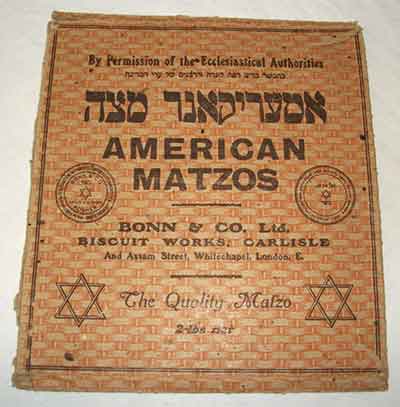 Finally, this is one of my favorite pieces from my collection, and it is for Pesach as well: a folded cardboard box for matzahs. As seen by the transcribed inscription below (which is featured on the inside of the box), this was used at a Seder service while World War II was still raging, as victory in Europe would not be declared until May of 1945. The Seder attended by this soldier had such meaning for him that he felt it necessary to rescue an empty matzah box from the trash and record some specifics of those two nights.

What had this soldier experienced? What horrors might he have seen? His future, and the future not just of the Jews, but of the entire planet was at stake. He must have felt such a sense of relief and relative normalcy in his life that he could attend a Seder in a European country that had been liberated only a few months before from the Nazis.

I wish you all a zissen Pesach! 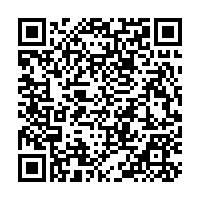