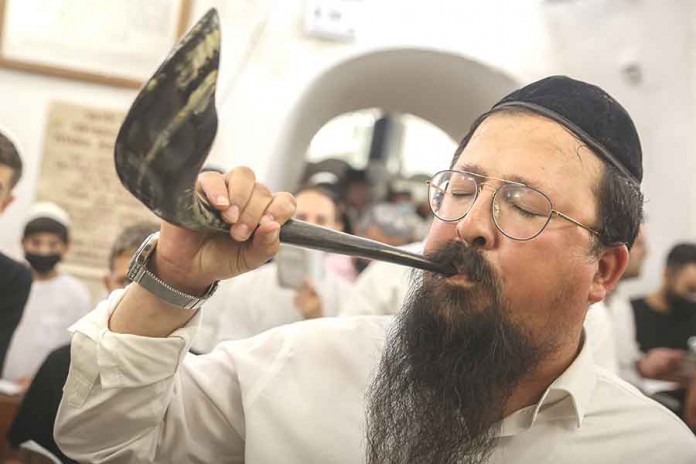 Throughout the month of Elul, the shofar is sounded at the end of morning prayers. It is a sign that the New Year is approaching. According to some authorities, the custom stems from the time when Moshe ascended Mount Sinai for the last time in order to receive the second set of Tablets. Before going up the mountain, a shofar was heard throughout the Israelite camp and that day was the beginning of the month of Elul. Hence, we also begin the month of Elul with the blasting of the shofar. Over time, the custom extended not only for one day, but for the entire month.

It is interesting to note that on Rosh Hashana itself, there is one, and only one commandment that the Torah requires us to perform: “It will be a day of teruah (blasting of the shofar) for you.” The blessing before the shofar is: “… who has commanded us to listen to the sound of the shofar.” Just as in the month of Elul, the beginning of our year is connected to an act of intense listening. But why is there no other commandment, no other action, required on this day? And why did the rabbis formulate the essence of the command to listen to the sound of the shofar and not merely to blow the shofar? It would seem that there is a very important message and significance in the act of listening.


In Rabbi Jonathan Sacks’s penetrating book Lessons in Leadership, he relates the following story in the name of Victor Frankl, a survivor of Auschwitz and famous psychotherapist: A patient he was treating phoned him in the middle of the night to tell him she was contemplating suicide. Frankl kept talking to her for two hours, giving her many reasons to live, until she finally told him that she had changed her mind and would not end her life. At her next appointment, Frankl asked her what reason had persuaded her not to commit suicide. “None,” she replied. The only reason that she changed her mind was because someone was prepared to listen to her for two hours in the middle of the night. That convinced her that life was worth living.

Throughout the book of Deuteronomy, one of the fundamental concepts is that of listening. We profess our belief in one G-d starting with the word Shema, or listen. But clearly the meaning is much deeper than just the act of listening. “Shema Yisrael” demands that we renew our emunah twice daily. In the portion of Re’eh, Moshe addresses the nation and says, “Behold I set before you the blessing that you listen to these commandments.” Listen? Is not the essence of Judaism to perform and do the precepts that we were commanded? Rabbi Sacks sums up the idea as follows: “In Judaism, listening is a deeply spiritual act. To listen to God is to be open to Him, and so it is with all forms of interpersonal relationships.”

The sound of the shofar during Elul, and again on Rosh Hashana, is a call to begin to listen, to hearken to that inner voice that often is hidden deep inside us. Perhaps that is the reason that on Yom Kippur, the end of the period of the Ten Days of Repentance, we say out loud: “Hear O Israel, the Lord our G-d, the Lord is One.” And just before the gates of heaven are locked at the Ne’ilah service, we again call out: “Shema Yisrael!”

The act of listening, however, is a two-way street. There is the speaker – trying to communicate an emotion or problem – and the listener. What is the role of the listener?

The art of listening requires a great deal more than just physically hearing the words of the speaker; it involves compassion as well. The Buddhist monk, Tich Nhat Hunh, once said: “Deep listening is the kind of listening that can help relieve the suffering of another person. You can call it compassionate listening. You listen with one purpose and one purpose only – to allow him or her to empty their heart.”

It seems that throughout the book of Psalms, and especially during our prayers, the emphasis is on our hope that G-d is listening. At the end of Selichot, the ark is opened and we say: “Listen to our voices the L-rd G-d, have pity and mercy on us and accept with mercy and favor our prayers.” We ask G-d to be an active listener, to be the one who listens to every word, every nuance, that is reflected in our voices. Every Amida, or silent meditation, ends with the request: “Blessed are You, G-d, who listens to prayer.” Many are the times when we find ourselves davening on behalf of others who are ill or who have had surgery, and we don’t know what the outcome will be. Sometimes, the prognosis is grave and the only thing that we can ask for is that G-d listens, that He be there with us and our pain.

Many years ago, in a course I was taking in guidance and counseling, the instructor, a psychotherapist, spent time listening to each of us, asking us to talk about something that deeply mattered to us. He sat in front of me, looking directly at me, waiting intently to hear what was in my heart. As I began to speak, he did not interrupt or say even one word – he just listened. I don’t recall exactly what I said, but I clearly remember the intensity of the moment and his interest in what I had to say.