Khalil Al-Hayya, deputy chairman of Hamas’s political bureau in the Gaza Strip, warned on Monday of a “return to the events of May 11.”

Hamas fired rockets at Jerusalem as Israelis celebrated Jerusalem Day and participated in the Flag March in the city. The attack led to 11 days of warfare and the IDF’s Operation Guardian of the Walls against Hamas.


“The enemy is trying to establish new facts, by announcing the march of the flags and by escalating in Sheikh Jarrah. We are telling the mediators clearly, it is time to curb the occupation [i.e. Israel] or the thunders will come,” Al-Hayya threatened.

He was relating to a planned second march in Jerusalem, which was banned by the police, and a pending court order on the evacuation of Arab residents living illegally in the Sheikh Jarrah neighborhood.

Al Haya emphasized that “the flag march to Al Aqsa Thursday, will return the parties to the confrontation that began on May 11.”

One of the squatting residents’ representatives in Sheikh Jarrah told TPS that “it seems that the chances of preventing the eviction are zero after the Attorney General’s announcement, and there is no chance that the settlers will compromise and give up the eviction order that was approved in the district court after they proved ownership of the properties.”

The level of tension in eastern Jerusalem is peaking with the announcement of Attorney General Avichai Mandelblit to the High Court of Justice on Monday that the state did not intend to express a position on the legal issue of Sheikh Jarrah. The decision comes days before the court hearing regarding the assets in Sheikh Jarrah.

In eastern Jerusalem, it is now estimated that the evacuation of the 28 Arab families is closer than ever, and it is expected to take place within days, in light of the court’s recognition of the ownership documents presented by the Israeli Nahalat Shimon organization.

A Fatah source told TPS that “the way has been paved for a confrontation and a renewed escalation.” According to him, Fatah will not abandon the arena in eastern Jerusalem and will not allow Hamas to take over the struggle, and Fatah is expected to participate in protest activities in the city.

Sources in the east of the city say that Mendelblit’s decision is of no importance because “in any case, Israel allows the takeover of the neighborhood’s properties. The attorney’s general’s decision is proof of the Israeli government’s forced immigration policy” against the Arabs.

A public figure, a resident of the Silwan neighborhood near the Old City, told TPS that “the residents of the neighborhood have nothing to lose. This is a dangerous move that no one is happy about.”

The court is also slated to rule on the ownership of properties in Silwan which Jews legally purchased.

The arrest Sunday night of Muna al-Kurd, an activist in the struggle and a resident of the neighborhood drew a series of stormy reactions on social media, as did the arrest of Al Jazeera reporter Jafra Berdiri.

The issue of Sheikh Jarrah adds to Hamas’ threats in recent days that it will “protect Jerusalem.” Hamas leader Yahya Sinwar said over the weekend that “if the occupation attacks al-Aqsa, Hamas will set fire to the area.”

Israel’s refusal to allow Qatari money into the Gaza Strip, as planned this week, also raises the chances of another confrontation with Gaza. The Lebanese newspaper Al-Akhbar reported that Hamas had sent a scathing message to Israel through Egypt, according to which it was giving Israel a week to allow the funds to enter. 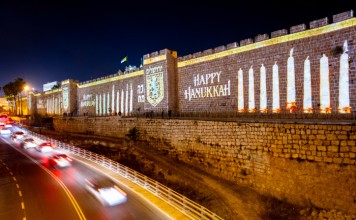