Amit Isman, the Criminal District Attorney for Haifa and Deputy State Attorney for special assignments, has been recommended by the state’s Search Committee as Israel’s next State Attorney, a post that has remained vacant for a year because of the general paralysis of the current rotation government.

Isman (pronounced Ice-man) told the search committee, which recommended him unanimously, that in his view the State Attorney’s Office needs to accept more responsibility, accept criticism, and have more transparency and accessibility. In light of the past few years’ non-stop battle between the State’s Attorney’s office and many rightwing politicians, most notably former Justice Minister Amir Ohana (Likud), one expected Israel’s media to celebrate Isman’s stated priorities. And, incidentally, Isman was part of the team that prepared the indictments against Netanyahu, so having him at the helm in the prosecution should have been encouraged by the media.


But the media focused on the candidate’s views on women’s modesty, or rather about their lack of it.

Back in 2017, an investigation was opened against Isman on suspicion of sexual harassment. At the conclusion of the investigation, the Civil Service Commission closed the case and recommended disciplinary action. The then director-general of the Justice Ministry, Amy Palmor, ruled that Isman’s statements constituted inappropriate behavior by a civil servant and reprimanded him in an internal disciplinary proceeding.

Sounds shocking, right? Here’s what actually ensued: the first statement attributed to Isman was made by him in 2008 while serving as a department head. Isman was talking to a female attorney about a sex offense case and at one point turned to an intern who was present and asked her out loud: “Do you have a mottled thong in your clothes closet?” When she said she didn’t, Isman turned to the other lawyer and told her: “This is a normal woman, she doesn’t keep such things in her closet.” The intern noted that the blatant remark embarrassed her, but she did not think it was meant to sexually harass or harm her.

The other statement was said after Isman had become district attorney, to a female attorney who consulted in him about how the defense was pressuring her to reach a plea bargain. Isman likened the pressure to what happens when the male reproductive organs endure pressure, starting by stating that she, not possessing these parts, may not get the illustration. As in the first case, the female attorney did not complain, because, she said, it was just one unfortunate line. There, too, it didn’t seem to be anything near sexual harassment.

There was also a complaint about the fact that Isman did not recuse himself from discussions of the promotion of a female colleague with whom he had a personal relationship.

At the conclusion of its investigation, the Civil Service Commission ruled that the statements attributed to Isman did not constitute sexual harassment and that there was no basis for an allegation made of an improper connection between Isman and his subordinate attorney. As for the two statements attributed to him, the commission ruled that the statements “amount to inappropriate behavior” and recommended that a hearing be held regarding these statements before the Director-General of the Justice Ministry.

The hearing was held, as I mentioned above, Isman was reprimanded, case closed.

Of course not. As soon as Isman was recommended, ready to mend all the crooked corners and clandestine traditions of the state prosecution, the case was reopened, not officially, but in the court of public opinion, or, more accurately, the women’s lobby in the Knesset and the media. And so one more brave Israeli was eager to look into the abyss – and the abyss looked back.

Isman is fighting back, and the Israeli media are kind enough to quote people in his circle, too, who say he “regrets with real remorse and not just superficially” those misogynistic statements. They also say the statement to a colleague that “a normal woman does not wear a mottled thong” was said “in the context of the case in question” and he took responsibility for it immediately. At the same time, Isman told his circle, who told the media, that some of the statements attributed to him in recent days were not made by him at all.

And you thought the Me Too persecutions have died down because of the pandemic – well, you were wrong.

‘Tight Lockdown’ in Effect Across Israel with 25 Police Highway Checkpoints 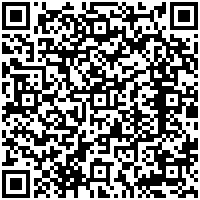