At the beginning of the migration season, the Israel Nature and Parks Authority installed live cameras in the Hula Nature Reserve north of Lake Kinneret.

The camera was placed over a pool detached from the water system in the reserve, where the public can observe the delivery of fish to the pelicans to supplement their nutritional needs during the fall migration.

Before its drainage in the early 1950s, Lake Hula was 3.3 miles long and 2.7 miles wide, about 4’11” ft deep in summer and 9’8″ ft deep in winter. The marsh-like lake was fed by several perennial springs. The lake attracted human settlement from early prehistoric times. Paleolithic archaeological remains were found near the “Daughters of Jacob Bridge” at the southern end of the valley. The first permanent settlement, Enan (Mallaha), which scientists date at some 10,000 years ago, was discovered in the Hula.

In the 1950s, the JNF created one of the worst ecological disasters in the history of the region by draining much of the lake to create agricultural land. They were very proud of themselves. 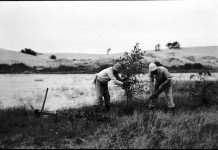 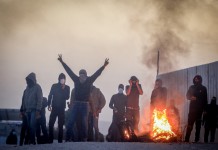