MK Bezalel Smotrich (Religious Zionism) this week said at the Knesset Plenum that “decent people should not remain indifferent to the circus that’s being revealed in the Netanyahu trial, the decay that’s emerging from a chain of omissions and failures that make it difficult not to attribute malicious intent to the police and the State Attorney’s Office and all their senior officials.”


A glaring revelation along the above line was Tuesday’s testimony of State witness Nir Hefetz, who told the judges that members of the former prime minister’s family, namely his wife Sara and his son Yair, forwarded requests through him to the management of the Walla news website, and told the website owners Shaul and Iris Elovitch to make sure to delete correspondence that could incriminate the family’s intervention in the content. The judges reprimanded the prosecution and ruled that its general direction did not fit the charges, as the actions of the defendant’s family members were irrelevant to the legal proceedings. One judge actually asked the prosecutor if she wanted the court to convict Benjamin Netanyahu for the transgressions of his wife.

As the Hefetz testimony is fast becoming an existential problem for the prosecution (in a Maariv poll on Tuesday, 12,500 respondents, or 72%, said Hefetz was making the case against Netanyahu weaker, only 4,000, 28%, thought it was helping it), Smotrich argued that Netanyahu was “being persecuted in order to oust him and the right from power in one of the most dangerous affairs to the democratic and Jewish identity of the state.”

“On this matter, I am on his side and that of his supporters and voters who see him as their leader in full, and I will do everything to thwart this plot,” Smotrich declared.

In his speech, MK Smotrich reminded his listeners: “I was one of Netanyahu’s biggest critics, so much so that he almost fired me from my position as Minister of Transportation. But I try to be a man of truth and neutralize my biases,” and added: “I gave this speech against Netanyahu’s persecution in the previous Knesset after he had thrown my friends and me to the opposition. So what did you think, that I would sell my values and beliefs and deny my truth about what’s good and right for the State of Israel just because he hurt me?”

Smotrich noted that Netanyahu is far from being the perfect leader for Israel, which is why he, Smotrich, is leading an alternative slate. Nevertheless, the plot to remove him from power through trumped-up charges must not succeed. 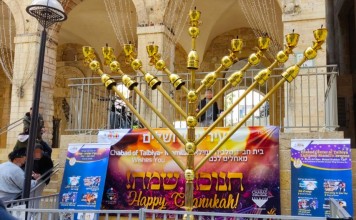