The maneuvers took place in the presence of King Abdullah II and appear to be a message addressed to Israel. The official Jordanian news agency Petra and the Jordanian press reported that the maneuvers simulated a defensive battle aimed at stopping an invasion of the country, and that they involved the use of many tanks, planes, and helicopters and a great number of weapons with the aim of “destroying the vanguard of the enemy and the bridges that can be used as crossing points” into Jordanian territory.


It should be noted that the official Jordanian reports did not explicitly state that the maneuvers simulated a battle with Israel. However, this can be understood from their name, which hints at the Battle of Karama, and because the maneuvers simulated an enemy army invasion via bridges – that is, bridges over the Jordan River that forms the border between the two countries. Additionally, the division that carried out the maneuvers is part of Jordan’s Central Command.

Furthermore, one photo of the maneuvers published in the Jordanian media showed King Abdullah standing with army commanders in front of a model of Jordan’s western border and the Dead Sea area. Also, an article published by a local Jordanian website stated explicitly that the maneuvers simulated a battle with “the occupying entity across the river” – that is, Israel.

This report will present details and photos of the November 25, 2019 Swords of Honor military maneuvers in Jordan.

According to a report by the official Jordanian news agency Petra, King Abdullah observed the tactical military maneuvers by the Royal Guard 1st Mechanized Battalion of the Jordanian Central Command that took place on designated training grounds. The report stated that the maneuvers simulated a defensive battle, with the participation of various corps, fighter planes, and helicopters, “with the aim of destroying the vanguard of the enemy and the bridges that can be used as crossing points” into Jordanian territory. Also according to the report, the forces used all types of light and medium weapons as well as anti-tank weapons and explosives, and the tanks fired their guns both when stationary and in motion.

Also attending the maneuvers, in addition to the King, was a lineup of senior Jordanian officials: Prime Minister Omar Razzaz, the director of the Royal Court, several government ministers, and members of the upper and lower houses of the Jordanian parliament. Also present were university heads and students, army veterans, and military attaches from several unidentified countries.

Jordan’s Joint Chief Of Staff: We Are Prepared To Defend Our Territory And To “Strike With An Iron Hand” At Anyone Daring To Harm Our Security

Chairman of the Joint Chiefs of Staff of the Jordanian Armed Forces Maj.-Gen. Yousef Huneiti said at the opening of the maneuvers: “In the near future, there will be a wave of preparedness. Through joint training and reinforcement of the elements of the military, competency will be increased, and [the branches of the military] will be provided with the newest weapons and equipment. There will be a focus on training the troops so that they will be at the highest level of preparedness for confronting the challenges and events of our time; they will be ready to defend the authentic Hashemite Arab territory and strike with an iron hand against anyone from the extremist and terrorist gangs who dares to harm the homeland’s security.”

Local Jordanian Website: The Maneuvers Were An Expected Message To The Occupying Entity To The West, In Light Of The Deterioration In Our Relations With It

On November 26, the local Jordanian website Rumonline.net published an article titled “The Swords of Karama [Maneuvers] – A Hint To Whom, And When?” The article focused on one photo from the maneuvers showing King Abdullah, Jordanian military commanders, and Jordanian officials standing in front of a model of Jordan’s western border in the Dead Sea region.

The article stated,”His Majesty the King stands at the center of the photo, as is customary, but before him is a geographic map presenting the western border of the kingdom overlooking Palestine… The map presents the King Abdullah Bridge area,[4] the [village of] Al-Kufrin, and even the Dead Sea, as areas for the Jordanian army [where the enemy will enter the country]. On the other side [of the river] are two flags – one symbolizing the Kingdom of Jordan and another symbolizing the area from which [enemy forces will] cross [into Jordan]. The [Jordanian] artillery in the field strikes the middle of the path between the flag of the Kingdom and the other flag symbolizing the occupying entity across the river [i.e. Israel].”

The article concluded, “It appears that this is expected, in light of the deterioration of relations with the occupying state and the increasingly harsh tone of [Israel’s] statements vis-à-vis Jordan… It seems that we will be waging a ‘cool battle’ with the occupier in the near future.” 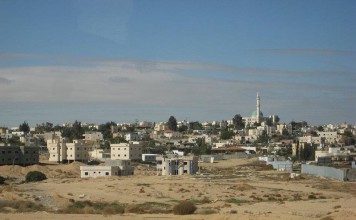