President Donald Trump and Turkish President Recep Tayyip Erdogan spoke by phone early Thursday and both agreed on the need to protect civilians in Idlib and to continue to cooperate to avoid a new humanitarian crisis in the region, Turkey’s Presidential Communications Directorate said in a statement.

Erdogan and Trump discussed the latest developments in Syria, particularly in Idlib province, as well as their own countries’ bilateral relations.

Last September, Turkey and Russia agreed to turn Idlib into a “de-escalation zone” where acts of aggression are absolutely prohibited. The deal instructed opposition groups in Idlib to remain in areas where they were already present, while Russia and Turkey would carry out joint patrols in the area to prevent a resumption of the fighting. But the Syrian regime with Russian and Iranian support have consistently broken the terms of the ceasefire, launching frequent attacks inside the zone.

Syrian troops supported by Russian warplanes have advanced in recent weeks against the rebels’ last major enclave in northwestern Syria near Idlib, and in the process have encircled a Turkish military post (See: Putin, Erdogan, Meet on Deterioration of Syria Understandings).

And on Aug. 19, Russian planes attacked a Turkish military convoy near Idlib, killing three civilians and wounding a dozen more. The Turks “strongly condemned” the attack and said it violated “existing agreements as well as our cooperation and dialogue with Russia.”

Trump and Erdogan also agreed to increase their countries’ bilateral trade volume to $100 billion, the presidential palace’s statement said. This despite the fact that Turkey is teetering on the brink of an expulsion from full membership in NATO over its acquisition of Russian S-400 ground-to-air missiles, which has already cost Ankara its share in the US F-35 program.

Erdogan congratulated Trump on the steps he has taken at the recent G7 summit regarding Iran, the statement said. 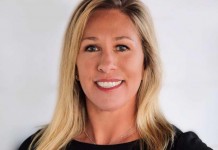