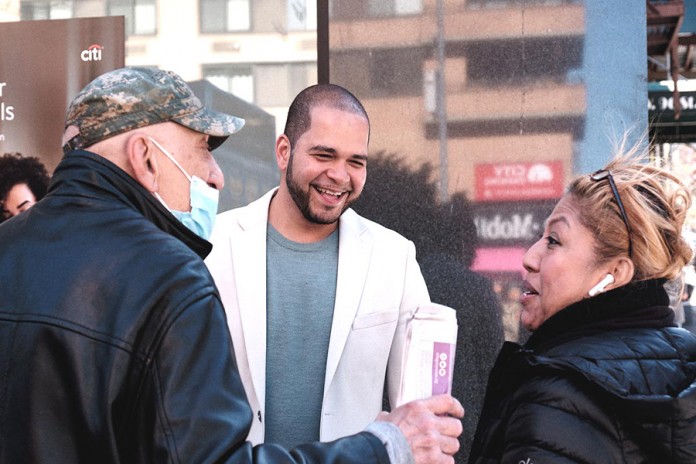 Angel Vasquez, 32, is running for New York State Senate’s District 31, which includes Washington Heights and Inwood in Manhattan and Marble Hill, Kingsbridge, University Heights and Morris Heights in the Bronx. He is challenging incumbent Robert Jackson who has held the district since 2018.

Vasquez came to the United States from the Dominican Republic (DR) when he was 4 years old, however his parents sent him back every summer to spend time with his grandparents. His fondest memories involve the evening hours; when all of his cousins would come over for story-time with his grandmother. They would hear stories about how their family moved from the rural parts of the DR and eventually settled in the city San Francisco de Macroiz. They also taught Vasquez and his cousins to have a good work-ethic, perseverance and determination. “Being able to stay very close to my grandparents was very important,” Vasquez shared with Jewish Press. Vasquez said his parent’s motivation for moving he and his brother to the United States was to seek out them a brighter future than the DR could provide. “The Dominican immigrant experience is a lot people from very low income or the working class looking for a better future for their children, and coming to America to seek the American dream.”

His family settled into the Manhattan neighborhood of Washington Heights, located just north of West Harlem, in 1993.” I think the good thing about it is though we were immigrants from the DR, we found a community we fit into. Washington Heights made us feel even though we left our country behind, we didn’t have to leave our culture behind.”

The Jewish Press caught up with Angel Vasquez to hear his thoughts on the direction he would take District 31.

The Jewish Press: What were some of the challenges you saw growing up in District 31’s Washington Heights that you would like to tackle today as state senator?

Vasquez: Our public education system needs more resources and it needs to be better supported. It’s one of the reasons my parents ultimately left Washington Heights and moved to suburban Teaneck, NJ., when I was 12 – because they wanted to make sure we got the best education possible. And I want to be the person today who goes into the schools in District 31 and fights for better resources. We have to make sure we invest properly in all schools. The other thing is public safety. When I was a kid, it was not the safest community, but before the pandemic it turned around and became one of the safest in NY, and now I want to make sure we go back to being one of the safest.

You attended two prestigious universities, and your district includes Yeshiva University. What are your thoughts on government oversight of religious schools? How much freedom should a school have to chart its own destiny?

For undergraduate school I went to Cornell University and for my masters I went to Columbia. I think as long as the school is giving the student the appropriate tools to be a success in our society, they should have that level of independence. I support religious schools but all students should be provided with an adequate education for after schooling is over.

We see a disturbing trend among the college system today; a trend of anti-Semitism, anti-Zionism, and a growing BDS (Boycott, Divestment and Sanctions) movement.

I don’t think this is a good thing. College campus should focus primarily on the academic experience. I don’t agree with the BDS movement. I have an extensive relationship with the Jewish community, especially in Washington Heights and Teaneck, where also there is a large orthodox Jewish community. I served as Chief of Staff for the former State Senator Marisol Alcantara (predecessor to Robertson). Our office had a very strong relationship with the synagogues and the University. We actually awarded Yeshiva University $100k to install the security barricades on Amsterdam Avenue, and as I mentioned I finished high school in Teaneck so I had great friendships with the Jewish community.

A lot of NYC polls have identified rising crime as the biggest issue of concern to New Yorkers. And we know the NY State Senate is directly responsible for the state’s controversial bail reform law. Do you believe the law has had a negative impact? Do we need to revisit or modify bail reform?

According to the latest statistic released by the NY Police Department (NYPD), it seems to be we have a revolving door of criminals – the same people are re-committing crimes over and over. As a Senator I would be open to looking at reforming the bail laws so that we can figure out how to stop recidivism. I would certainly be one who says this is an issue, everyone is talking about it, our constituents see it, we really need to address nit.

What were your thoughts when you learned the Supreme Court had ruled against NY state law that made carrying guns more restricted? That said, do you respect the 2nd amendment and people’s rights to bear arms?

Of course, I respect the 2nd amendment, it’s enshrined into our constitution. I just think we need to be very careful who gains access to guns. Particularly in a city like NY. We are just way too compact a city. its troubling to think that anyone in a grocery store can be next to someone with a gun, especially in a city with a population of almost 9 million. So, I was shocked and I’m glad our state leaders quickly reacted with legislation.

So, what’s your plan to make District 31 safer?

We need law enforcement to patrol the streets more. I see they are visible in their vehicles but we need them on the actual street, building relationships. My constituents say there’s not enough of it,

Why should the Jewish community in Washington Heights vote for you?

In me, the Jewish community has an advocate and a friend and an ally. I am pro-Israel. And I look forward to visiting Israel during my first term. I would love to see the Western Wall.