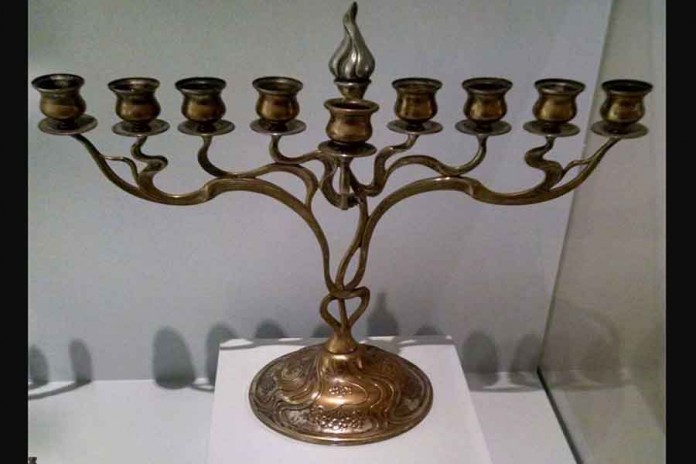 The Chanukah menorah as we know it today, with eight separate receptacles for oil and a ninth placed at the side or at the top, probably developed during the Middle Ages. The earliest Chanukah menorah in existence hails from this era; it was found during excavations in Avignon, France. 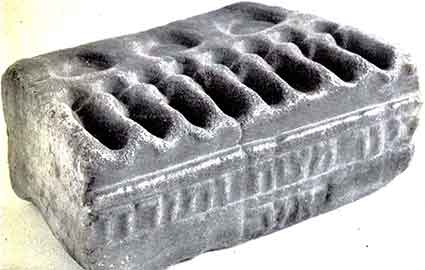 Made of stone, the menorah dates to between the 12th and 13th centuries, and beneath the eight reservoirs for oil, it states in bold, block Hebrew lettering: “For a commandment is a candle and the Torah is light.” (Proverbs 6:23). In addition to the construction and style, the period range of 12th to 13th centuries for this menorah is made based on when the Jewish community of Avignon was expelled, and when they were allowed back.


Since there are so few extant Chanukah menorahs from the 14th and 15th centuries that can definitively be described as hailing from this time period, it is incredibly helpful to scholars to find illustrations of Chanukah menorahs that date to these centuries. One of the earliest known is shown here, from the Hebrew manuscript Halachic decisions of Isaiah ben Elijah di Trani, the Younger from Perugia, Italy. This manuscript is dated 1374 by the scribe Jekuthiel ben Solomon.

We see a Jew dressed in typical Italian clothing of the period, lighting an enormous Chanukah menorah. While scholars are unsure if the dimensions of this menorah are true to life or are heavily exaggerated, the design has similarities to what has survived. Notice the shape of the reservoirs, which are pinched at one point.

In 1977, during excavations in the old Jewish quarter of Teruel, Spain, broken pieces of an olive-green glazed ceramic Chanukah menorah were found. 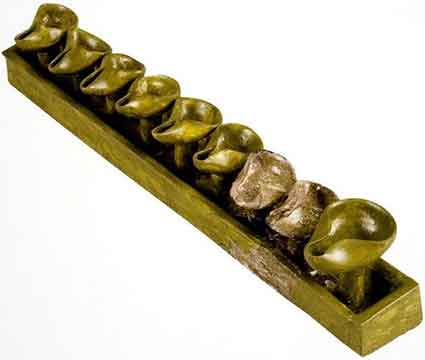 After a full restoration, this is what it looks like. Notice the shape of the oil spouts when compared to the image in the manuscript. This incredible rarity dates to the 15th century, and is one of six ceramic Chanukah menorahs that were found during excavations in Spain; the others were dug up in the old Jewish quarter in Lorca, and date to the 15th century as well.

Referring back to the manuscript illustration, the pointed elements at the top of the Chanukah menorah are known as “crenellations,” and are derived from medieval architecture. These forms can be seen today in structures such as the Palazzo Vecchio in Florence, which dates to the 14th century. Seen here is a 16th century cast brass Chanukah menorah from Italy with crenellations at the top – as well as the same Hebrew verse found on the unique stone example from Avignon. 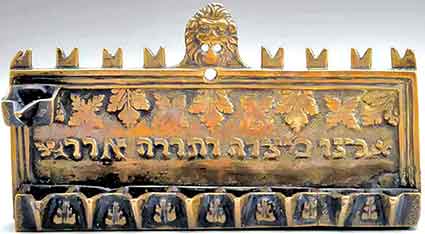 There are other examples of 14th and 15th century Chanukah menorahs that have survived, all in cast brass and in the shape of a triangle, with built-in loops at the top to hang on a wall. These menorahs are thought to hail from Spain, France, or Germany, and some feature architectural elements that were popular in those countries at the time, including mirhabs, also known as “horseshoe arches” or “keyhole arches,” which are found in buildings in Spain. The synagogue of Toledo, built in 1180, has an interior that is filled with these mirhabs. Although this synagogue was converted into a church in 1411, it is considered the oldest synagogue building still standing in Europe today.

You may sense a pattern developing here – of the makers of Chanukah menorahs using design elements that are taken from the surroundings from where they live, i.e., what they saw every day. You would be right, and this would continue and greatly expand into the decorative arts, with many designers of Chanukah menorahs adopting popular fashions of the time and featuring them in the menorahs they made.

Thus far we have discussed medieval and Renaissance-era Chanukah menorahs made of stone, ceramic, and brass, but there has been no mention of any in silver. No doubt there were silver examples made for wealthy Jews, but none are known today, likely due to the constant upheavals of expulsions and violence perpetrated on Jews of various European communities – as silver is a precious metal, any silver menorahs that were looted would be hastily and easily melted down. 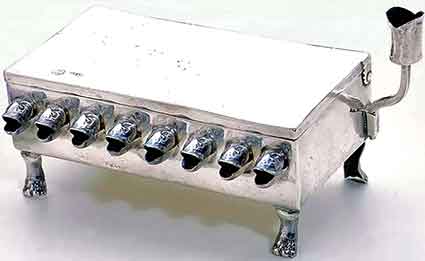 The earliest silver Chanukah menorah known from Germany is most likely this “chest form” example, which according to the hallmarks found on the menorah, was made by the Christian silversmith Caspar Birckenholtz, who fashioned this piece sometime between 1661 and 1690 in the city of Frankfurt. The Jews of Europe were barred from the guilds, which meant they had to hire a Christian silversmith if they wanted a professionally made silver Jewish ceremonial object. All but one of these chest form menorahs that are known today bear hallmarks that state they were made in Frankfurt.

The only ornamented portions of this menorah are the spouts that held the wicks, which are in the shape of fish’s heads, and the paw-shaped feet. This simplicity could reflect the influence of the “undecorated style,” which was one of the trends in early Baroque decorative arts of the second half of the 17th century. Eighteenth century versions of the chest form menorah evolved into having a heavily decorated backplate depicting animals such as lions or deer. Because chest form menorahs are so often associated with the Frankfurt-based silversmiths that made them, when an example appears in the marketplace, it is often described as a “Frankfurt-type Hanukkah Lamp.”

As the centuries moved forward, and the decorative arts evolved – and then in the 19th century, reverted back to older styles (known as “revival”) – the appearance of many European Chanukah menorahs remained stagnant. It seems that a significant portion of European Jewry of the 19th and early 20th centuries desired Judaica resembling “what their grandparents and great-grandparents used.” Therefore, many Chanukah menorahs made in the second half of the 19th century appear quite similar in form to examples that were made in the early- and mid-18th century. This “tradition” has continued to this day, as if you go into any of the large silver Judaica stores in cities such as Brooklyn, for example, you’ll see silver Chanukah menorahs that are near perfect copies of ones made in the 19th and early 20th centuries from Germany, Austria, Hungary, and Poland.

If you are a regular reader of this column, you may have noticed a menorah in the logo at the top, next to the words “Antique Judaica Roadshow.” That image is of a Chanukah menorah in my personal collection; the photo was taken when it was on display at the Museum of the City of New York during the winter of 2015. It is made of brass and was designed in the Art Nouveau style, which began around 1890 in France and lasted until 1910. The focus of this style was to incorporate elements from nature such as vines and plant life.

In my humble opinion, this menorah is one of the most beautiful menorahs created in the 20th century (it was made circa 1905 in Germany), as it almost entirely incorporates features of this style, with delicate, flowing lines that resemble vines making up the shaft of the menorah, while on the circular base, a scene of water lilies in raised relief is revealed. 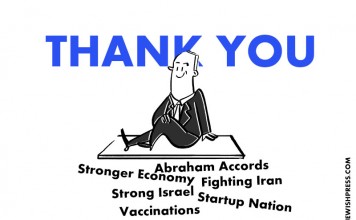