An analysis published this weekend by the Wall Street Journal contends – as has Prime Minister Benjamin Netanyahu over the past year – that Gulf States led by Saudi Arabia are slowly but definitely beginning to change their attitudes toward Israel.

Journalist Yaroslav Trofimov writes the impetus behind the move comes from concern over the danger coming from the Shi’ite Islamic Republic of Iran.

As they generally do when faced with a dilemma, the Saudi leadership has found a way to smooth over the difficulties posed by the seeming discrepancy of drawing closer to Israel after decades of outright anti-Semitism and hate.

“The neighbor of the Prophet (Muhammad) was a Jew, and when that Jew was ill, the Prophet visited him and gave him kind words,” al-Issa said. “The hard-liners don’t wish to know that.”

Moreover, deputy Saudi intelligence chief Maj.-Gen. Ahmed Asiri pointed out in February that both Israel and Riyadh share concerns over Tehran. “We have the same enemy, the same threat,” WSJ quoted. He also noted the U.S. is an ally of both Israel and Saudi Arabia as well.

Perhaps one of the most important changes, however, is the tiniest: Political analyst and Saudi businessman Ahmad al-Ibrahim told WSJ that although sympathy for the cause of the Palestinian Authority still runs deep, it is not endless. “Saudi Arabia has always wanted to support the Palestinian cause,” he said. “It negotiated on their behalf, it spent a lot of money on their behalf. But unfortunately the Palestinian leaders do not want to get along and are not working for their own people. You cannot just say ‘no’ to everything.”

And so it has continued to this day, with the PA government instead choosing to make incitement against Jews and Israel an active part of the social programming of its population from the cradle to the grave. The brainwashing of all citizens has taken priority at all levels to ensure the concept becomes part of the population’s cultural heritage as fast and as thoroughly as possible.

For readers who wish to see examples of the Palestinian Authority-sponsored incitement and the programming translated by the Palestinian Media Watch (PMW) organization, click here.

Now with U.S. President Donald Trump on his way to the region later this month — his first stop slated to be in Riyadh — it is possible the fragile bond between Israel and Saudi Arabia may grow even stronger. If it does, so too is the likelihood of peace in the region as well. 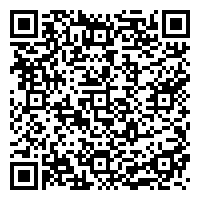