I believe doing teshuvah is the most difficult thing in the world.

“Difficult” does not mean “bad.” As the Bostoner Rebbe of Far Rockaway, Rabbi Yaakov Horowitz, shlita, told me some sixteen years ago when I was trying to get my first book published, “If it’s easy, it’s not emmesdik [truthful].”


Important things are difficult to accomplish.

Putting it another way, Rabbi Yisrael Salanter is reputed to have said, “The loudest sound in the universe is the sound of a habit being broken.”

Why does breaking a habit make a sound? And why is it loud?

Let’s imagine the loudest sound in nature. I would think a volcanic eruption is huge, but perhaps a meteor striking the earth is louder. In 1908 a meteor struck Siberia with a force estimated to have been one thousand times that of the Hiroshima atomic bomb; the impact flattened eighty million trees.

But let’s not confine ourselves to the earth. I imagine that the boiling sun is incredibly loud (although I wouldn’t want to get close enough to hear it). But the sun is only a small star. The largest known star is called VY Canis Majoris, whose circumference is 2,000 times that of our sun. Try to imagine the sound of that raging fire!

The sound of a habit being broken is a spiritual rather than a physical sound. A physical sound can be heard only by an ear that is close enough to hear it. We don’t hear the sun because it is more than ninety-two million miles away, but a spiritual sound is “heard” throughout the universe, because there are no physical limits to spirituality.

Physical sounds are produced by naturally occurring forces, which Hashem created without effort. As it says (Kail Adon), “He called out to the sun and it glowed with light, He saw and fashioned the form of the moon.”

All it took was a word from Hashem. “He perfected [the universe] without fatigue and without weariness” (Akdamus).

When we build something spiritual, we have massive opposition. Let’s list some names for this force: the Satan, the Evil Inclination, (yetzer hara) the malach ha maves, (angel of death). This force has been given a strength by God that is far above the strength of the most powerful people. Despite its strength, our job on earth is to battle this force. If and when we defeat it, the sound is deafening.

It can be done. Here is what the Chazon Ish wrote to a talmid:

“Strengthen yourself, my dear one…and envelope yourself with the fortitude to engross yourself in the Torah, for it is for that purpose you were created. With just a little more [effort], you will be able to come to grips with your yetzer hara. Then his defeat will be total, and he will no longer bother you. Just overcome him today, and he will be your faithful servant for all time.” (Recounted by Rabbi Shlomo Lorincz, In Their Shadow.)

I think this is amazing. I didn’t think that in our days (and how long ago was this, really?) one can still hope to overcome the yetzer hara and make him our servant. But apparently it can be done, and the amazing thing is that once it is subdued, the yetzer hara can turn around and devote its incredible power toward helping us.

How many people are capable of accomplishing this? Possibly a handful in this generation. But as we’ve seen, it is possible. So let’s try to understand.

When I was a young boy, before I had heard the word “Torah” or knew anything about Jewish life, I was aware of a prodigious opposing force within me. This force ruled my life, or at least I believed it did. This was the primary focus of my early life, and – because of it – I was forced to look for a way out of its influence, a way out of the prison of my soul.

That is what motivated me to find a way out of that lifestyle and what eventually pushed me to the Torah when all other alternatives failed. This entailed a tortuous – and torturous – journey of thirty-one years, which could have led anywhere. But Hashem was merciful and led me Home. When all other “solutions” turned out to be empty, the only one left was the one I never wanted, and that was finding the Torah.

Even as a young child, I was completely overwhelmed by the pressure of this force. I guess I was especially sensitive, but I am sure that I was not imagining this phenomenon. The friends of my youth (mostly Jewish) did not follow this path. Many people succeed in making themselves deaf to the cry of their souls, but I was never able to do that.

Just what was this force? It was a dark one. I felt I was literally a slave to it. For one thing, it made me feel I was worthless, a failure. It made me feel powerless, because it ruled me. If I wanted to be happy and feel free and unfettered, I could not do so, because I felt trapped. When I went away to summer camp, I felt homesick, but when I returned home I did not feel healed. I had no spiritual resting place, like Noach’s dove, which “could not find a resting place for the sole of its foot” (Bereishis 8:9).

My wife, whom I met as a teenager, tells me I appeared normal to everyone else, but that is not how I felt inside. I wanted to be like those around me and live (what I thought was) a carefree life, but it eluded me. I was a prisoner of the monster that lived inside my soul.

I believe that this “being” inside me is what we call the yetzer hara. My neshamah felt entrapped by it. Because I lived a secular lifestyle and had no knowledge of Hashem, I felt completely vulnerable to this monster. There was no Ruler of the Universe I could call upon to save me, and so I had to fight this lonely battle until I found the One Strength that could save me.

Riding the Waves of Teshuvah 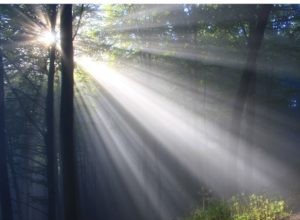