Bruno D., 93, was found guilty in German court on Thursday of 5,230 counts of accessory to murder during his service as an SS guard at the Stutthof concentration camp, from 1944 to 1945. He was given a two-year suspended prison sentence.

This effectively means that if Bruno D. dare ever again to assist in murdering Jews – it’s two years in prison for you, Mister!

The reason the elder Nazi’s full name cannot be revealed is that he was tried as a juvenile, since he was only 17 when he helped murder all those Jews. He was actually tried in a juvenile court in Hamburg.

Stutthof was a Nazi concentration camp established in a secluded, marshy and wooded area near the small town of Sztutowo, 21 miles east of the city of Danzig (Gdansk). Stutthof was the first German concentration camp set up outside Germany. It was also the last camp liberated by the Allies on May 9, 1945. It is estimated that between 63,000 and 65,000 prisoners of Stutthof concentration camp and its subcamps died as a result of murder, starvation, epidemics, extreme labor conditions, brutality, and lack of medical attention. Some 28,000 of those who died were Jews. In total, as many as 110,000 people were deported to the camp in the course of its existence.

According to Deutsche Welle, Judge Anne Meier-Göring (I know, it’s just getting better all the time) acknowledged young Bruno’s “willingness to take part in the trial and listen to the testimony of victims.”

The man just gives and gives.

Judge Göring did rebuke Bruno, however, for refusing to recognize his own guilt. “You saw yourself as an observer,” she scolded him.

Here’s another one from the Deutsche Welle report: “The judge similarly rejected claims that Bruno D. did not know what people in the camp were dying of.”

I’m telling you, Mother, every day I go to work and for some reason those inmates continue to die. It’s a mystery…

“Of course you knew what the people died of. They died of the human hell of Stutthof,” the Judge said.

Attorney Stefan Lode, who represented some 40 former camp inmates from Israel, France, Poland and the US who testified against Gestapo Boy, told Deutsche Welle his clients would be satisfied with the sentence, even if it was just a suspended one. “No one wanted to send an old man to prison,” he said. “Human dignity would prevent that.”

Actually, my late father, Monik Yanover, a graduate of Lodz ghetto, Auschwitz and Dachau, would certainly have wanted the ancient beast to spend his last years behind bars. Suspended, for sure – from the ceiling.

Christoph Rückel, another attorney representing little Bruno’s victims, said his clients might not agree with Lode’s Christian generosity of spirit. “I expect they will be satisfied with the guilty verdict, but the fact that the sentence was suspended, not so satisfied, I think,” he told Deutsche Welle. “Because that sends a signal of laxity that I think is not appropriate for a crime like this. The court said itself that if he’d been in court in 1982 he would have been punished more severely.”

May we suggest the noose? 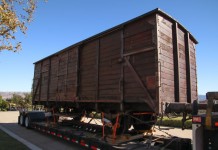