Six hundred and sixty-nine new Corona patients age 60 and under in Israel were hospitalized in critical condition in September, according to the Health Ministry. The same data show that 531 (79%) of these critical patients were not vaccinated at all, 120 received two vaccine doses, and only 18 received the third dose as well. In other words, only 2.7% of critical Corona patients received the booster shot, while the country’s hospitals are collapsing under the burden of more than 93% of critical patients who failed to follow the medical establishment’s advice.

The head of the Corona Czar’s team of experts, Professor Ran Balicer, on Thursday morning addressed the high morbidity on Reshet Bet radio, saying “the morbidity is mainly in children of the unvaccinated age group.” He explained that a balanced outline must be found for returning to schools after the holidays “to avoid a state of morbidity that exists in Arab society.”


But very few children are counted among the fatalities of the pandemic, thank God. On the other hand, the data show that the rate of critical patients among adults ages 60 and under who were not vaccinated is almost 80%, compared with only about 3% among those who were vaccinated.

Among the deceased age 60 and under as well, the rate of those vaccinated with the booster dose is quite low. According to Health Ministry data, since the beginning of September, 40 Corona patients age 60 and under have died, 28 of whom (70%) were not vaccinated, 10 (25%) were vaccinated with only two doses, and only two (5%) received the booster dose. All these Corona patients are Israelis ages 30 to 59 who died due to the complications of the pandemic.

The pandemic is not slowing down in Israel, with 723 critical patients out of whom 172 are on ventilators, as of Wednesday. So far, close to 7,600 have died of the pandemic since February 2020.

On Wednesday night, Kan 11 News ran an interview with Dr. Ziv Rozman, a senior physician in the Intensive Care Unit at Wolfson Medical Center in Holon, who warned that from his point of view, caring for critical patients, Israel is still far from emerging from the fourth wave of infections.

“I very much hope that not all the million unvaccinated—for one reason or another—will have to get infected with the Corona in order for this wave to stop,” Dr. Rozman said, and cautioned that “should that happen, we will find ourselves in a very bleak situation.”

About 40 of the patients in critical condition in Israel are connected to Extracorporeal membrane oxygenation (ECMO) machines. They provide prolonged cardiac and respiratory support to critical patients whose heart and lungs are unable to provide an adequate amount of gas exchange or perfusion to sustain life. It’s the final step in the medical treatment of critical respiratory patients, and it often does not end well.

There are only 80 such machines in the entire country, but it appears that the problem lies not in the availability of ECMO machines, but the diminishing manpower.

The problem is that it’s impossible to use one critical care nurse for more than one patient, and the rate of erosion of the competent staff is high as the country reaches the end of its second year of the pandemic, Dr. Rozman explained, adding, “We didn’t expect the ECMO to be our weakest link, but if we don’t start reducing the number of patients who need ECMO, we’ll have to make difficult decisions.”

By “difficult choices” the good doctor is hinting at starting to decide who lives and who dies based on the availability of equipment and staff.

Israel’s fourth wave continues to harm many more younger individuals than before. Only on Tuesday, Chaya Leah Bergman, 31, a Corona patient from Modi’in Illit who recently returned from Rosh Hashanah in Uman, was evacuated with shortness of breath to Assaf Harofeh Medical Center outside Tel Aviv. The young woman collapsed before arriving at the Corona ward and her death was determined shortly thereafter. She, too, was not vaccinated. 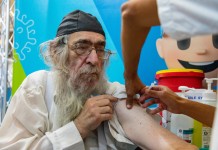