A 67-year-old Jewish man was punched in the face as he was entering the Congregation Kerem Shlomo synagogue on East 27th Street in the Sheepshead Bay section of Brooklyn on Monday around 9:30 PM.

According to the NYPD, the attacker, a young black man named Hersham Ghonim, suddenly jumped the Jewish man and hit him in the face, yelling, “[expletive] Jews!” and “I’m going to [expletive] you up. I see you Jews are racist.”

As of Wednesday morning, Congregation Kerem Shlomo in Sheepshead Bay is listed online as “permanently closed.”

Another NY Jewish Councilman under Attack, This Time by Gay Media 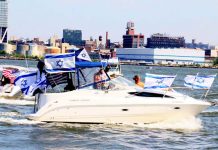