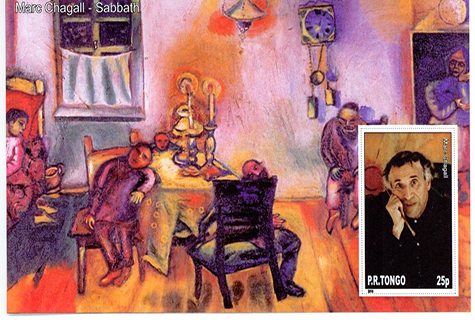 Although Shabbat, as we know, is among the fundamental pillars that support the continued existence of the world, it is a very rare subject indeed for postage stamps around the globe. Displayed here are the few stamps specifically presenting the Shabbat theme. (If readers are aware of any others, I would appreciate hearing from you.)

Israel has issued a variety of Sabbath-related stamps. Exhibited here is, in my opinion, the most beautiful of them all (Scott 631, 1977) which depicts a lovely Sabbath embroidered cloth used to cover the challah loaves during Kiddush. The inscription on the challah cover reads “For the honor of Shabbat” and the stamp label at the bottom cites the pasuk (Exodus 31:16) “And the Jewish people will observe the Sabbath to celebrate the Sabbath throughout their generations as an eternal covenant.” Other Shabbat-related Israel stamps include depictions of Sabbath lamps, wine cups, Havdalah spice boxes, etc., but this is the only one specifically referring to Sabbath observance.

Shown here is a lovely Shabbat stamp issued in 1988by the Jewish National Fund. The modern colorful design depicts a Shabbat candelabra atop of which is written, in Hebrew, Shabbat Shalom. Though the first KKL/JNF labels have been issued continuously since 1902 and were strictly for fund-raising purposes, including for the redemption of land in Eretz Yisrael, these labels were twice used as actual postage stamps for a brief period of time.

First, these labels were used on mail sent locally among the first Jewish colonies in Eretz Yisrael, as the Austrian postal service operating there at the time agreed to deliver mail posted with the KKL Zion stamp – an arrangement that came to an unhappy end when it was disclosed to the ruling Turkish authorities, who were not pleased.

Second, after the main road to Jerusalem was blocked by the Arabs in 1948, postal services became very dangerous and was finally stopped completely on April 25, 1948, with the British Mandate postal services in Tel Aviv and Haifa ending officially on May 5, 1948. Pursuant to a decision by Minhelet Ha’am (the People’s Administration Council), the use of KKL labels was authorized for use throughout Eretz Yisrael until the first stamps of the new Jewish state could be issued. Though the first Israeli stamps, called Doar Ivri, were issued on May 16, 1948, the KKL labels continued to be used as postage for some time thereafter until the new Israel stamps could be broadly distributed.

In my collection of many hundreds of Judaica stamps and labels from around the world, this stamp from Denmark (Scott 766, 1984) is perhaps my favorite. It lovingly depicts a woman lighting Shabbat candles over a table set with a wine cup and challahs covered by a cloth marked Shabbat Shalom in Hebrew.

The stamp was issued to mark three centuries of Jewish religious rights in Denmark. On December 16, 1684, King Christian V issued an ordinance to the chief of police in Copenhagen allowing two Jews to hold a religious service in their homes, mornings and evenings, together with other members of the “Jewish Nation.” Exhibited here is a 2011 Mozambique stamp depicting artist Samuel Hirszenberg and his painting Sabbath Rest (1894), a famous and oft-reproduced touching image of a multi-generational Jewish family sitting in repose at the Shabbat table after lunch, enjoying both the rest and the warm sunlight streaming in from the room’s window. The original painting can be found in the Ben Uri Gallery at the London Museum of Jewish Art. (This stamp was one in a series of six Jewish artists, which also included Camille Pissarro, Amedeo Modigliani, Moritz Oppenheim, Maurycy Gottlieb, and Chaim Goldberg.)

Hirszenberg (1865-1908) is considered one of the two greatest Jewish painters in turn-of-the century Poland. Raised as an Orthodox Jew, he became an active Zionist who, inspired by the idea of Jewish national revival, created a series of works depicting the displacement of East European Jews and became among the first to introduce the Jewish artist as a cultural critic and as an advocate for Jewish political and social concerns. The Tomor label exhibited here, The Beginning of the Sabbath, depicts an early 20th century Jewish German family on a typical Friday evening. The lady of the house has just completed lighting the candles, and her husband and son are heading out to synagogue for Shabbat evening services.

Tomor is a kosher dairy-free margarine made in Germany, and the “Sana-Gessellschaft” (Sana Company) of Kleve Kosher Tomor margarine issued collector promotional labels (circa 1904) illustrating various Jewish scenes with German subtitles. Sana’s parent company was the Van den Bergh Margarine Works, founded by Simon Van der Bergh (1819-1907), a Dutch industrialist and an Orthodox Jew. His business manager, John Manger, established the Sana Company around 1900 as an independent factory exclusively for kosher products, including the Tomor brand, which remains known to this day.

Shown here is The Sabbath, a 1987 souvenir sheet issued by Tongo in honor of the centenary of the birth of artist Marc Chagall (1887-1985). In classic cubic style in which he has apparently drawn stylistically from Van Gogh’s The Workshop and Night Café, Chagall illustrates a peasant Jewish household on Friday night. The particular emphasis of the 1909 painting is upon a Shabbat table highlighted by two halos of light, the first a yellow circle surrounding the lit candles on the table, and the second a colored sphere of light shining forth from the lamp hanging above the table. The only wall decoration, a lonely clock, suggests the timelessness of Shabbat and the concept of religious time prevailing over human time.

It is obviously Friday night, as the lit candles are still burning bright, and it is clearly well after the Shabbat dinner (the clock reads 11:15). The six figures are in various stages of sleep or rest, including a variety of “Chagall-esqe” contorted positions. Time seems to have stood still, and they are all waiting. 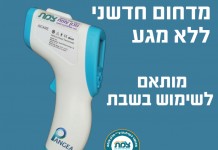 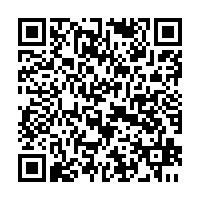