The debate as to whether or not the flyer passed out to the Jewish community in Ukraine was an “official” document or not, and whether it was sent by the Russians or the Ukrainians, is abhorrent.

The fact is, someone deigned it appropriate to bring overt anti-Semitism into the fight between the Russians and Ukrainians, and that is all there is to it.

As JewishPress.com pointed out, it’s not going to stop at threatening letters. At 2 AM, Saturday morning, the Nikolayev synagogue in Ukraine was firebombed multiple times, as the anti-Semitism escalates.

The attack was caught on the shul’s CCTV system, and posted online by Yisroel Gottlib, the son of the city’s Chief Rabbi Sholom Gotlieb.

You can watch the entire attack on the video below.

In February, the Giymat Rosa Synagogue in Zaporizhia, southeast of Kiev was firebombed for the first time.

Daytime photos of the synagogue after the attack (photos by Yisrolik Gottlib, using a normal camera): 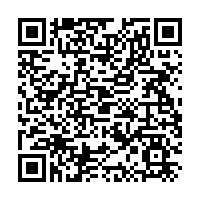