The anti-circumcision bill in Norway, which the country’s foreign minister vows will not become law, is being pushed by the country’s child welfare adviser who wants Jews and Muslims to understand that causing pain is tantamount to a sin far worse than violating the Jewish law of circumcision.

New legislation on non-medical circumcision of boys under 18 is scheduled to be introduced before mid-April.

Her claims are questionable to say the least, but lest she be accused of trying to negate religious practice, she has a solution to those Jews who insists on upholding the ritual that is the physical bond among Jews since Abraham and which is the bond with God, for which Jews have been cursed and killed.

Her solution, reported here, is simply to perform a “symbolic ritual,” presumably one in which the baby will not cry, God forbid.

It would be easy to criticize her for ignorance of Judaism, but why expect a non-Jewish pediatrician from one of the most anti-Semitic countries in Europe to understand Jewish law and belief?

Lindboe is a pediatrician. She has seen children abused and even killed by parents, some of them mentally disturbed, drunk or simply wicked, and she puts them in the same basket as normal parents who circumcise their baby boys.

“We introduced a law on violence against children even though we had reason to believe that individuals would still be beaten and mistreated,” she told the newspaper,, dismissing concerns raised in Norwegian media that a ban on ritual circumcision would mean that parents would perform it illegally.

“If 15 years is set as the minimum age, we expect Norwegian parents follow and respect the law,” said Lindboe, a longtime advocate of the criminalization of ritual circumcision, which she considers a form of abuse and infringement of children’s rights to “physical integrity.”

“I think it’s disrespectful towards minorities to assume that they are going to break the law,” she added, showing an unbelievable ignorance of the very concept of any religion.

Her thinking, so to speak, reflects a modern and sterile philosophy that there is no such thing as “religious law” if a government views it as wrong.

Her attitude also reflects a modern view, often Christian, that no one has to suffer in life. Smile, have a nice day and don’t struggle with everyday difficulties that cause pain.

It is the same type of bleeding heart mentality that is behind “engagement” with monsters like Syrian President Bassar al-Assad and with masters of evil, such as the Islamic regime in Iran.

Regardless of whether Norway keeps its promise, the anti-circumcision campaign is alive and well around the world, even  though Germany passed legislation last year to protect Jews and Muslims’ right to circumcise their children.

As reported here and here, the Council of Europe’s parliamentary assembly passed a non-binding resolution to ban ritual circumcision.

Some politicians in Quebec, a long-time bastion of anti-Semitism, have floated the idea of a ban.

Jews in Quebec have no fear of a ban, but more worrisome is the thinking, or lack of thinking, in which intelligent people want to see the world as the cover of a Saturday Evening Post magazine from the 1950s, or as a Woodstock festival, where no one has to struggle and everyone lives in complacence.

The problem with the dream world is that it leaves it defenseless against the Assads and Ayatollahs.

Linboe’s “no pain” world  that she wants to replace religious circumcision, about which she knows only a bit of the physical side and less than nothing about the metaphysical side, is a world that pretends evil does not exist and therefore does not have to be fought.

The Wiesenthal Center has said about all of the campaigns to ban circumcision, “Historically, such draconian actions were taken by tyrants, dictators and mass murderers. Today we are confronted with such initiatives being proposed and passed in democracies.”

The results are the same, but that doesn’t matter to the anti-circumcision crowd. The only thing that matters is that they don’t feel the pain when an Iranian or Hezbollah nuclear bomb blows up in their back yard. 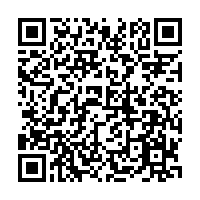